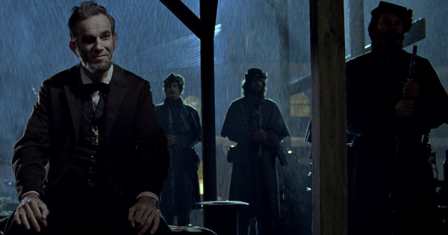 Maybe the most striking thing about Steven Spielberg’s Lincoln is how un-Steven Spielberg-y it is. This is a film built around a series of conversations, with old guys in wigs harrumphing and posturing around tables. The only action setpiece occurs at the start, where we see some brief glimpses of a bloody skirmish during the Civil War. The rest of the movie is Daniel Day-Lewis telling anecdotes and being wise while people smile or chuckle or get exasperated and yell “Stop telling so many damn stories!”

Lewis is great, but we all know that right? It would be more shocking if Lewis sucked as Lincoln, using the Jerry Lewis “HEY LADYYYYY” voice while constantly farting. But no, Lewis is his usual magnetic, super-good-at-acting self.  He conveys Lincoln’s warmth and intelligence and charisma, and I’m sure he’ll win all of the shiny baubles once award season comes around. What, it’s already started? Eh, who cares.

Lincoln has a cast featuring every character actor in Hollywood giving their all in an attempt to dramatize a pivotal moment in history.Tommy Lee Jones is in the film as radical abolitionist Thaddeus Stevens. Stevens is, get this, an old grumpy dick! Of course Jones nails it. James Spader, John Hawkes, Joseph Gordon-Levitt and pretty much every male charactor actor in the universe excels in their roles. Oh, and I find Sally Field irritating, but she was good as Lincoln’s probably-crazy wife.

So why did Lincoln leave me so cold? I’m not sure. In terms of craft, the thing is perfect. On any objective level, it’s a good film, masterful even. I think my issue with it is that it belongs to that stuffiest of genres, The Historical Biopic. <—- NOTE: That’s not pronounced “Bi-OPP-ic.” Took me years to learn that.

The Historical Biopic has been done so many times that its formula is ingrained to anyone that has watched a lot of movies: Classically trained actors do expert impressions of some of history’s leading, uh, leaders, in between delivering tons of exposition because the dunderheads in the audience don’t know anything about history. This leads to statements like “Don’t you realize that those historical figures are the Vice President, Undersecretary and Assistant to the Undersecretary of the Confederacy??”, a statement that the actor who played Gale on Breaking Bad says in the film. (I’m paraphrasing it.) I’m always taken out of those textbook-style moments. I get that they’re necessary for the viewer to know what’s going on, but seeing as how the names and positions of those characters are shown in titles on the screen later, is it really necessary? It probably was, but it always takes me out of the film.

Lincoln is old-fashioned. In fact, Spielberg’s last few films have been fairly musty. War Horse was a fine tribute to John Ford that I have no desire to see again, and even Tintin, in all its CGI’d glory, is ultimately an old-timey adventure. Lincoln falls into that same wheelhouse; it’s the best picture of 1958. Lincoln is good for you, like carrots. I look forward to hearing my niece and nephews complain about having to watch it in school in the year 2017.